From David Sweeney, President and CEO:

Analysis of zip code data by the Longwood Collective estimates 1,200 Longwood employees from Somerville and Medford can now enjoy a one-seat commute on the Green Line between the LMA and the five new stations opening this week: Medford/Tufts, Ball Square, Magoun Square, Gilman Square, and East Somerville. This access for commuters traveling to the LMA is in addition to the 400 LMA employees who’ve been enjoying direct Green Line service since the opening of the Union Square station in March.

We further estimate that 16,000 Longwood-area patients will be able to access a faster, more convenient ride between their Medford and Somerville homes and the medical facilities in the LMA. While many patients are unable to utilize public transit due to compromised immunity or discharge requirements, the overall number shows the full potential of who this extension could benefit. That includes 3,000 already able to access the Union Square branch and another 13,000 who can most easily access the newly opened stations.

Here at the Longwood Collective, we are excited for the potential of the Green Line Extension project, as it represents one of the single largest improvements in mass-transit access to the district, providing 7-day service along the Green Line D (Riverside) and E (Huntington Avenue) branches. The implementation of this public infrastructure project is a testament to why Longwood Collective staunchly supports systemwide improvements, as the impacts on the LMA community are significant.

So if you saw some Longwood Collective staff handing out free coffee this morning to GLX riders and other passengers—that was because we think this Day 1 is something well worth celebrating.

On behalf of the Longwood Collective membership, and the employees, students, patients, and visitors of the district, especially those now enjoying a much-improved commute from north of the city, I want to share a big “thank you” to everyone at the MBTA who made the GLX a reality. Today is a day that has been literally decades in the making, and to all of you I say, “Congratulations!” 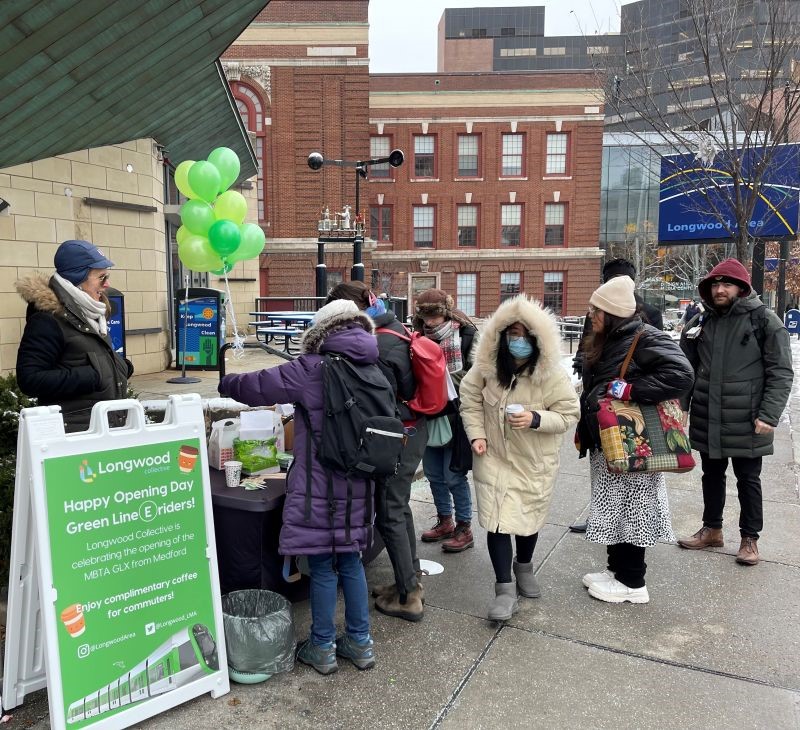